What is gluten? And other frequently asked questions about gluten
Gluten causes problems for some people. Here’s a look at that protein, where it’s found and gluten-free diets. 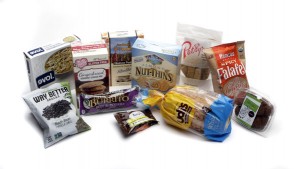 A selection of gluten-free products show the variety of food available for those avoiding gluten. (Glenn Koenig / Los Angeles Times / May 14, 2013)

Gluten is a protein that is found in certain grains, including wheat, barley and rye and triticale (a cross between wheat and rye).

Gluten causes inflammation of the small intestine in people with celiac disease, which is an autoimmune disease diagnosed with a blood test or biopsy; other symptoms include digestive problems, anemia, fatigue, headaches and joint pain. Avoiding gluten is the treatment, though there is no cure. Left untreated, celiac disease can lead to severe intestinal damage and osteoporosis, among other conditions.

In addition to such obvious foods as breads and cakes, many products may have wheat in them. For people avoiding gluten, it’s important to read labels. Some unlikely sources of wheat include processed meats, seasoning mixes, snack foods, soups and sauces, salad dressings, medications and supplements. In addition, people who are particularly sensitive need to avoid foods produced in facilities in which wheat products are made.

Are there risks of a gluten-free diet?

Many grain products in U.S. supermarkets are enriched with iron, thiamine, niacin, folate and other nutrients. People who eat gluten-free should check with a professional to make sure their diets are healthful.

What grains are gluten-free?